Mike is an established Canterbury artist, living and working in Springston South near Te Waihora/Lake Ellesmere.

Since his first public showing of work at the CSA Gallery in 1991, Mike has exhibited widely in both group and solo exhibitions.

In 1995 he initiated and co-curated the Hinewai Reserve Charity Art Exhibition at Picturesque Gallery in Akaroa and later that year became a full-time artist. His work has sold to many collectors in New Zealand, the UK, Australia and North America.

Largely self-taught, Mike’s art work is popular for its bold, often stylised images of land, sky and water. He is particularly known for his pastel landscape paintings which combine an intensity of colour with the tonal sensitivity of the soft pastel medium.

Mike draws inspiration for his work from his love of the New Zealand landscape and his interest in conservation and community. The birth of his daughter further highlighted for Mike the need to address environmental concerns in his work. Among other things, he believes children should have a future that includes fishing and swimming in rivers and drinking clean water.

To clean our dirty planet

and I’m putting my shoulder to the wheel

‘cause I want to catch some fish 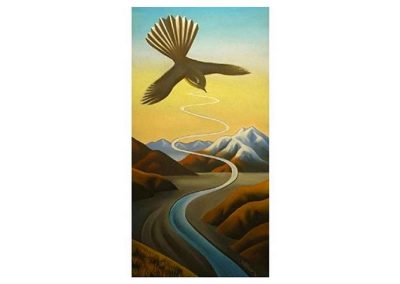