Like portals to paradise, Kirsty Nixon’s large-scale paintings invite the viewer to pull back the ‘fringes’ of our native flora to reveal quintessentially New Zealand landscapes hidden in behind. Framed by the structural forms of our native foliage, like cabbage tree leaves or nectar-laden flax flowers, and almost always with a native bird or two in attendance, unfolding before your eyes could be an endless coastline, a deep, green cove or perhaps even a glimpse of the far horizon.

Kirsty is repeatedly drawn to the New Zealand landscape in its various guises and while on holiday at the bird sanctuary island Tiritiri Matangi recently she experienced a sense of utter peace while watching the bellbirds flitting about the feeders and hearing their hypnotic song. Returning home, she became keenly aware of the absence of native birdsong and thus her new works pay tribute to the ways in which the melodic voices of our native birds have the ability to enrich our lives as we navigate daily life.
Based in Auckland, Kirsty has been painting full-time since 1997, initially in the medium of watercolour but now having found her home in the freedom and impact of acrylic. 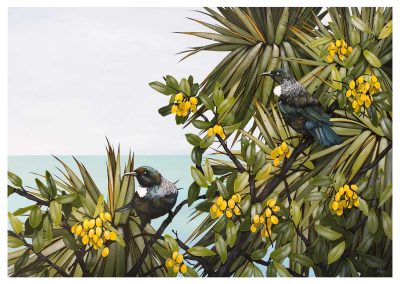